We offer a FULL electrical testing & inspection service in and around Mansfield, Nottingham & surrounding areas. We are available to complete Electrical Installation Condition Reports on any size or type of premises – Domestic, Commercial, Office, Shop & Retail outlets. We also offer a full ‘Landlord Certificate’ service for landlords & estate agents for any rental/sale properties you may require certificates for. Does your consumer unit have a sticker on the front stating when its next test is due? If not, it is likely that it has not been tested within the last 10 years, or maybe never at all. There could be hidden faults or electrical hazards that you are unaware of, that could have the potential to cause a fire, injure or even kill! Domestic premises should have there electrical installation periodically inspected & tested every 10 years. Retail & commercial installs every 3-5 years. Lots of people are unaware of this, and until something goes wrong, are unaware of the risks they may face if they do not have regular inspections carried out. If you are un-sure, call us & one of our engineers will come and offer advice and provide a quote for the inspection, free of charge! A few jobs we have completed recently have thrown issues to light that people are often un-aware of. We have put together the following information just to show you what hidden risks can be found.

Job 1: Customer calls because they are getting an electric shock from an outside tap! We were contacted by a customer who has some concerns, as she was getting what she described as a ‘shock’ from an outside tap. We arrived at the house, and did a visual inspection to start with. We noticed that the consumer unit was quite old, and had no previous dates of when it was tested. This rings alarm bells straight away, because this installation may have been installed & NEVER tested, meaning any faults or hazards would not have been found or identified. We went to the suspect tap which was on the back garden. We used our test equipment to check to see if there were any voltages present at the tap. And to our disbelif, there was! 240 volts in fact. Which is mains voltage, with the potential to kill. And with this being an outside tap, the added water & weather could have easily made this tap lethal. This customer had been very, very lucky. 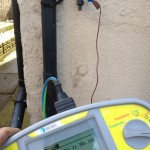 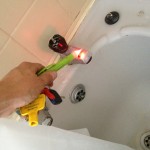 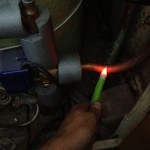 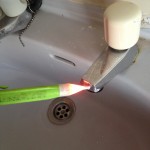 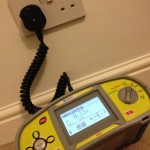 We then carried out a full electrical inspection which uncovered a lot of alarming faults. There was no main earth, or earth bonding to pipework in the house at all, meaning an earth fault on the socket circuit was causing the voltage to travel through the consumer unit & and into the pipework via the boiler control wiring. All metal pipework in the house was ‘live’ with 240v. Even the bath & sink taps! We removed the fault, upgraded the consumer unit & installed a main earth & all earth bonding. If the customer had had this installation inspected, these faults would have been identified & rectified before anyone got the chance to get a shock!

Job 2: “Its been alright for the last 10 years!” This is what most customers say when we advise that an inspection is due. Its a favorite for most electricians as we know too well that this may well be the case, but whats to say there is something hidden in your loft that’s just biding its time?

We were to install some new lighting in a customers home. Our intentions were to modify the existing circuit to incorporate the new lighting. Before we modify any circuit we test the cables first to ensure there are no faults & that its safe to go ahead with the work. No previous test records were available as the installation had not been tested since it was installed back in 1998. The test indicated that there was a serious fault on one of the cables, but because of the age of the installation, there were no RCD circuit breakers that are designed to detect this kind of fault, so it had not been detected by the consumer unit, which nowadays would ‘trip out’ to indicate the problem. We informed the customer of this, and he genuinely thought we were wrong. He stated that it had been OK for the last 10 years and that he did not want to go ahead with any fault finding, and that we should continue with the work regardless. But as registered electricians, we were unable to do this as electrical safety was compromised. We explained again the seriousness of the situation, and that we could not leave this damaged cable in service, we went ahead and found the fault within 1 hour: 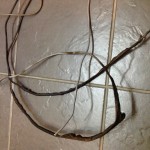 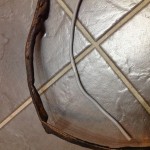 A cable had been trapped between two joists in the loft causing a high resistance compression fault, causing the cable to burn & melt If this had been left un-detected, this would have easily caused a house fire. The condition of the cable was like nothing we had ever seen before, and after showing the customer what had happened, they were very happy we found it.

Electrical inspections are necessary for your safety. Call 01623 368 603 now to book a free quote.

By continuing to use the site, you agree to the use of cookies. more information